Christoph von Breitenbuch is the managing director of the ABG Leine-Solling. The ABG Leine-Solling manages four individual agricultural properties in the South-West of Lower Saxony. Mr. von Breitenbuch is responsible for the crop cultivation and the profitability of the agricultural business. The spatial distribution as well as the distinct phenological development at the different farm sites is a reason for Mr. von Breitenbuch’s demand for large-scale spatial information on biomass derived from satellite data.
As member of the DLG (German Agricultural Association) committee on „Technology in plant production“, Christoph von Breitenbuch is always interested in improving his farming strategies and in using reliable information sources for management decisions. In the harvest year 2012, the

TF Base Map, TF Biomass Map and TF Yield Forecast were delivered to the ABG Leine-Solling.

„In some locations on our farms, permanent water logging causes problems. After receiving the TF Base Map in summer 2012, my personal impression of the drainage problem was confirmed. The problems are caused by penetrating soil water of a nearby ridge. The TF Base Map shows lower persistent relative biomass at the affected sites compared to other neighbouring fields with comparable soil quality (see following figure ). Confirmed by this objective and reliable information source, I was able to realize the installation of a new drainage system with the support of the other partners.

As for my crop management, I also look ahead with TalkingFields. Up-to-date TF Biomass Maps from spring 2012 showed me clearly where winter damages have happened. Thus, I can monitor crop growth and, if necessary, react with measures. For example in 2012, I discovered some smaller winter damages in remote field parts only after looking at the TF Biomass Map. Reacting instantly and re-sowing these fields, the yield loss could be reduced.
In the harvest year 2013, I will include the TF Products more deeply into my management strategies.“

Klaus Münchoff owns and manages a farm in the North of the Harz mountain range. The growing conditions on his farm are very heterogeneous. Because of the low water holding capacity of the soil and small precipitation amounts due to the location at the lee side of the Harz, the field management is a challenge – a challenge which Mr. Münchhoff has been facing successfully for almost 20 years using site specific management. In cooperation with his neighbour and

Since 2012, Klaus Münchhoff uses the TF Base Map as well as the TF Biomass Map and TF Yield Forecast

“The soils on our farms are very heterogeneous. The soil differences are mirrored by the biomass patterns in the TF Base Map. Subterranean lime ridges running through our fields, clearly coincidence spatially with areas of low persistent relative fertility in the TF Base Map.
In 2012, I arranged a field trial with different varieties of winter wheat especially for TalkingFields. Some varieties were developed well after the winter season. Others suffered from winter damages and never caught up. The up-to-date TF Biomass Maps confirmed this without a doubt. 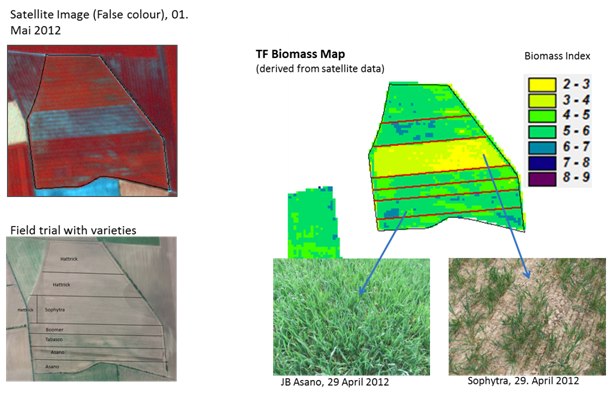 The TF Biomass Map derived from satellite data of the 1st of May clearly shows that the variety JB Asano had a good growth status after winter, while Sophytra was weakened by winter damages.

Also, the results of the TF Yield Estimation are remarkable. Now I have complete yield maps over three years – without calibration inaccuracies or data gaps. In 2013, I will test the use of the TF Biomass Map as basis for application maps for different management strategies.“

Because of the location of his farm North of the Harz, where soils are heterogeneous and precipitation is low, Rüdiger Klamroth has been working with site-specific cultivation methods for almost 20 years on both his own farm and with his enterprise, the Landwirtschaftliche Dienstleistungen und Logistik GmbH Co. KG. In 2010 he received the TF Base Map from

, in 2012 he received TF Biomass Map and TF Yield Forecast

„Everything looks different from above? No, the TF Base Map has confirmed my results from other techniques like soil scanning or the farm soil map. At the same time, the data is available fast and for my whole farm, and the effort I as the farm manager had to put in was low. Especially in regions, for which there is only little information about the site characteristics available, the TF Base Map is a sound and reasonably priced information source. Now I want to take the cooperation a step further and use TalkingFields also for my daily crop management.

In the harvest year 2012, I received the up-to-date TF Biomass Map showing absolute biomass information for all my winter wheat fields. The spatial biomass patterns on the TF Map match those of my online-sensor well (see following figure). In contrast to the biomass from the online sensor, the TF biomass information is available even before I start up my tractor. I have high expectations for the use of the TF Biomass Map as basis for the creation of application maps. I expect both time and cost savings. In the harvest year 2013, we will work on realizing the creation of application maps based on TF products (with a focus on growth regulators).”

Kolchos „Kasminsky“ is located near Stavropol in Southern Russia and has a total acreage of ca. 42 000 ha, out of which 30 000 ha are seeding area. The farm is part of AGRO300, the 300 most successful agricultural businesses in Russia and is currently ranked 18th. It employs ca. 1700 people, owns 257 tractors, 90 harvesters and 320 other agricultural machines. Of these, several machines have precision farming capacities, e.g. 5 harvesters, 2 fertilizer spreader and 2 plant protection / fertilizer sprayers. The farm owns a TrimbleGPS system for their site-specific applications. The first

product they received was in 2010 the TF Base Map.

Satellite data provide an overview, show patterns and allow an estimation of heterogeneity in the field. We show you how to use this information for your decision-making processes. TalkingFields products determine the characteristic performance of your sites and quantify current biomass and yield.